From gravitas to chavitas in a period of Purdah

AS we swing into what I was astonished to find out is still called Purdah (curtained-off women's quarters in traditional Persian household / the six weeks before election during which government must not issue policy which could swing election outcome), the purveyors of gravitas and chavitas furrow their brows and practise their glottal stops.

For this is the time when politicians must illustrate to voters  not only their depth and intellectual strength, but also that man/woman of the people ability to kiss babies, head footballs at shell-suited toerags, and generally show how much they know about Lady Gaga,  dubstep, Plan B and other such down-with-the-kids cultural touchstones.

And they fail, nearly all of them. I'll mention no names, as the Representation of the People Act probably precludes me, as a BBC presenter and (very part time) paid local government advisor, from picking out my least favourite. But the nauseating sight and sound of suited and booted Holyrood habituees swivelling uneasily between the Tragedy of Japan and the Need For Caution In Libya, The Price of Petrol and The Importance of Take That, Tinchy Strider's iconic status and the state of Sharleen Spiteri's haircut leaves me reeling with irritation.

It's their sound. The way they change their voices to meet different kinds of question from different types of questioner. Their vocal equivocation is caught on camera and microphone ('awright, big man, howzitgawn...ah yes, the tragedy of Afghanistan lies in the global inability to recognise the country's key historical and geo-political role...") one voice for the landowner, one for the serf. One noisy slurp for the mug of council tea, one dainty hissing sip for the Rotary Chardonnay. And is there contempt once the doors are closed, the dram is in hand and they're relaxing with series three of The Thick Of It? Contempt akin to Harry Dean Stanton's when he tells Emilio Estevez in Repo Man: "ordinary people. I f*ckin' hate 'em"?

Names? You want names? Nah, mair as ma joab's worth, pal. There's an election on, doncherknow?
Posted by Tom Morton at 7:52 pm 1 comment: 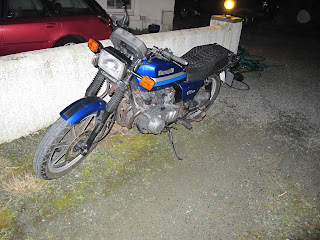 I was, frankly, concerned about riding the old Kawasaki the 35 miles home from Lerwick tonight. It was gusting up to a force seven, sidewinds for the most part. It was getting dark, and my eyesight is increasingly bad at coping with lack o'licht. And this was a £400 bike, old, if well cared for, that I'd never ridden before.
It was great. There were a few problems - the bike hadn't been ridden for a while, it needed to blow some gunge out of its venerable (F-reg) systems and it took a wee while to get used to the controls. But after 10 minutes, in a blowy but dry twilight, the GT550 was a delight to ride.
First rides home. Sometimes they're the best, the quintessence of what biking is about. You're discovering, hopefully, the worth of what you've bought, usually after a period of un-biking.  I was especially pleased by the fact that my last motorcycle ride, a horrendous, sleet-and-gale battered journey to the ferry with an eBay-flogged Moto Guzzi, was on a bike worth 10 times the Kawasaki. And  the lovely, newish Guzzi was a worse performer - for my needs - in everything but looks.
Because there's a reason the wee GT550 was - still is - the ultimate courier's tool. It's small and light. Very nippy up to 60. It has a huge petrol tank, massive range and the best headlight of any motorcycle I've ever ridden. And best of all, for Shetland conditions, it's rock solid in sidewinds.
Also, I wore my cheap as chips Max flip-up helmet, which unlike my excruciatingly expensive AVG does not steam up and stay opaque. Coupled with powerful headlight, for once I could see where I was going as darkness fell.
So there we go. The bike came complete with a box of spares, manuals, and a newish helmet. Steve, the owner, is giving up biking for good. Or so he says.
That's what I said, just three weeks ago. And now...well, now I have both the old Suzuki GS1000G for high days and holidays, and the Kawasaki for...other occasions. Oh, and did I mention Hugh Kerr's lime green GT550 which I'm picking up in April when I'm on the mainland? No? I was sure I did...
Posted by Tom Morton at 8:39 pm 1 comment: 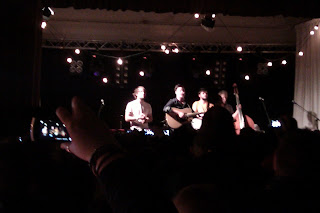 Marcus Mumford and 'Country' Winston Marshall were on the show today, straight off the plane from Inverness, with the lovely Rachel Sermanni, who supported M&S tonight. Rachel played beautifully (both on the show and tonight, though she had to struggle at W&W with a boisterous crowd), the lads were splendid (I mean, from the Grammies and 19 million viewers to our humble wee show from Lerwick...what a privilege. For them...)
Found out afterwards that Marcus M is not only a biker (Triumph Bonneville T100 - excellent choice) but a lover of malt whisky. A very good sign indeed, as long as they're combined carefully.
Took Martha to the gig and she loved it, oblivious at the front to the considerable rammy of noise and conversation behind. It's an old Shetland problem - a night out is a night out, no matter who's playing, and that means craic with pals and much drink. Nothing wrong with that, but you'd think, having queued in many cases all night for tickets, a bit more attention might have been paid to the band.
Anyway, M&S (unlike Franz Ferdinand, who played the same venue a while ago) were unstinting in their performance. They really, really went for it, and appeared to love what they were doing. Generous. Winning. Gentlemen. New songs very good too.
Posted by Tom Morton at 12:19 am 1 comment:

I came into Lerwick on the early bus this morning. Buses, really - the 07.35 from Hillswick to Brae (10 miles) then the main Mossbank commuter run into Lerwick. There's always a degree of weary grumpiness on said vehicle; and who can blame any of us for being irritable at that time of day, especially when you're battling for a seat on an urban low-level pantechnicon that seems somewhat unsuited to a rural, 25-mile run with loads of braking for sheep? A bus where today, several - humans, not sheep - had to stand most of the way?

Actually, while waiting for the Hillswick feeder service I met old friend and neighbour Scott, out walking his dog and waiting for 'da pipper' (the paper) to arrive. Not that Scott has a Shetland accent, being from England via Edinburgh. He likes to watch the traffic queue building up outside our community shop, as people wait for the arrival of The Shetland Times on the post van. In Shetland, despite local radio, an alternative online news service (The Shetland News) and its own regularly updated website, the arrival of the new Shetland Times, in tabloid newsprint form, every Friday, is the media event of the week.
All over the islands you can see vans and cars parked up of a Friday, their drivers hidden behind the full-colour, locally printed paper.  First call is always the Births, Marriages and Deaths section, followed by the advertising (which always makes me wonder if the old newspaper habit of putting these on the front page was, in fact, psychologically correct). And then the rest, including one of the biggest sports sections of any weekly, though there are some unusual forms of competition in there ('Laurenson to fore in radio car event'. )
There are around 23,000 people in Shetland, and the Times sells between 11,000 and 12,000 print copies. It's editorial department is well resourced, paid and staffed. It makes loads of money. And it's a good, serious newspaper, independent of tone and, still family owned, very much part of the community that gave birth to and still sustains it.
One of my jobs as communications consultant to Shetland Islands Council is to look at the way we can use the internet and social media to communicate more effectively with the community, and there's no doubt that the likes of Facebook and Twitter, not to mention blogs, RSS feeds and participation in community forums such as Shetlink  can provide certain advantages. Yet the ubiquity of the Shetland Times of a Friday morning, in almost every shop you can think of, from bakeries to butchers to ship's chandlers, and its value as an artefact (it's hoarded, re-read, kept, lent) always makes me wonder at those media statistics claiming that local print is on the way out. Not in Shetland. Surely, in an insular but scattered rural community, print will retain its power and value?
Having said that, my bus journey was spent in the company of today's Guardian, unavailable in the islands in print form until late morning. Using software called Calibre, each morning's Guardian is automatically downloaded to my Kindle e-reader, free. It's transformed my day. I no longer buy print dailies, except in dire necessity.
But I still bought a Shetland Times in Malcolmson's bakery this morning, along with a mutton pie and Chelsea bun. Sometimes old forms of sustenance are best.
Posted by Tom Morton at 11:02 am 4 comments: